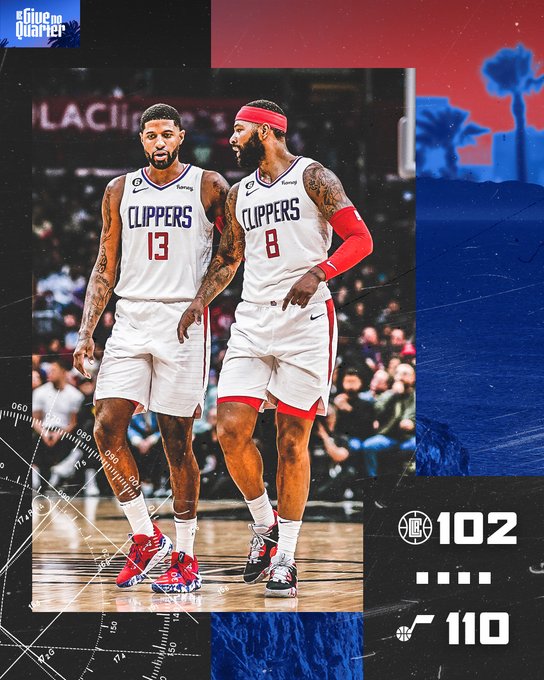 Los Angeles Clippers took a three-game winning streak into a home contest against the Utah Jazz on Sunday but fell by 8 points to unpredictable Utah Jazz.

Kawhi Leonard has played in just two games for the Clippers this season and none of the last six as he is attempting to return from a knee procedure that cost him the entire 2021-22 season.

Leonard has played just 42 minutes and has come off the bench in his two appearances. His availability issues were instrumental in the Clippers’ 2-4 start, although they now have consecutive victories over the Houston Rockets as well as another win Friday against the San Antonio Spurs.

Paul George has been a force of late, however, scoring 32 points in the 113-106 victory over the Spurs. George has averaged 31.7 points over the past three games.

The Clippers aren’t sure when Leonard will be back, so George has taken to leading the team through the uncertain times.

“We’re dealing with some problems with guys. Out-of-our-control stuff,” said George, who leads the Clippers with 23.8 points per game this season. “But we’re figuring it out. I think people are stepping up.”

The Jazz took the floor for their second consecutive game at Los Angeles after defeating the Lakers 130-116 on Friday. Lauri Markkanen continues to lead the way for Utah; he scored 27 points while also matching a season best with 13 rebounds.

The veteran, who is in his first season with the Jazz, has scored 22.2 points per game. Markkanen never has scored more than 18.7 per game in an NBA season.

But Markkanen was far from alone against the Lakers. Four other players scored in double figures, including 20 points from Jordan Clarkson and 18 from Kelly Olynyk. Mike Conley had 10 assists.

The Jazz were 7-3  and now 8-3 having found surprise success at LA. Recall they have parted ways with their All-Stars Rudy Gobert and Donovan Mitchell during the offseason.

“I think the spacing is the biggest difference for us,” Conley said. “We’re so unselfish that the ball’s just moving around and pinging, and every one of the five guys can beat you off the dribble and make plays.”

Utah’s victory at Los Angeles on Friday ended a three-game road losing streak and they built upon the win against the Clippers.