Ronaldo cast his back and is not happy about many things

“Man United tried to force me out. Not only the manager, but also the other guys who are around the club. I felt betrayed”. “I feel that some people didn’t want me at Manchester United, not only this year but last season too”

“I love Man Utd, I love the fans, they’re always on my side. But if Manchester United want to do it different… they’ve to change many, many things”.

“As Picasso said, you’ve to destroy it to rebuild it… and if they start with me, for me, it’s not a problem”

“A club of this size should be at the top, but this is not the case, there is no excuses”.

“Nothing has changed here since Sir Alex left. When I decided to return to Manchester United, I followed my heart”. “Sir Alex Ferguson said to me: ‘It’s impossible for you to come to Manchester City!’. And I said: ‘Ok, Boss’”.

Cristiano Ronaldo on Ralf Rangnick: “If you’re not even a coach, how are you going to be the boss of Man Utd? I’d never even heard of him”

“If you don’t have respect for me, I will never have any for you”.

“Manchester United have betrayed me. I’ve been made black sheep. I don’t respect Erik ten Hag”. 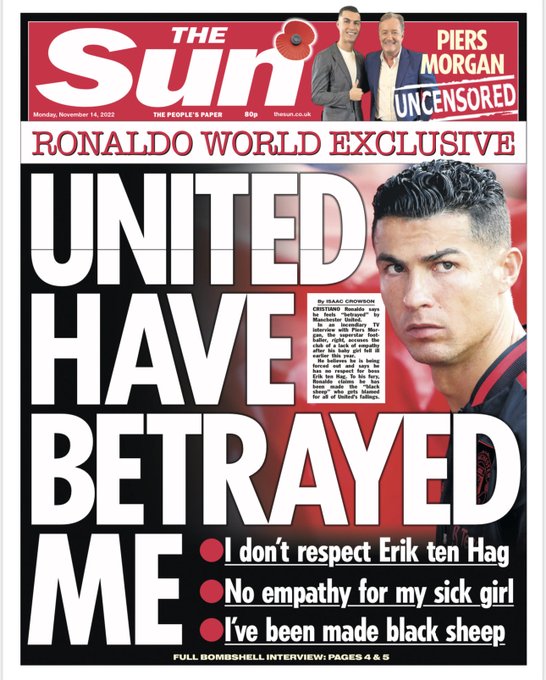 He said that there is little chance of Ronaldo going back to Manchester United after the World Cup in December.

The 37-year-old forward recently had an interview with Morgan where he slammed United boss, Erik Ten Hag and some members of the club’s hierarchy.

Ronaldo said he will never respect manager Ten Hag, adding that he feels betrayed at the club where he is already a living legend.

Morgan still sees Ronaldo as the best player in the world, even claiming now that Arsenal should bring the superstar to the Emirates to bolster their title credentials.

“He’s exactly what we [Arsenal] need. Cristiano and Gabriel Jesus would take us to the title,” he said.

Morgan, a former GMB presenter, suggested that there could be no way back for Ronaldo at Old Trafford after his bombshell interview.

He wrote: “I ’m not sure how this saga ends, other than it’s hard to see how Cristiano Ronaldo can return to Manchester United after this.”

Breaking: Sanwo-Olu’s CoS Wife is Dead