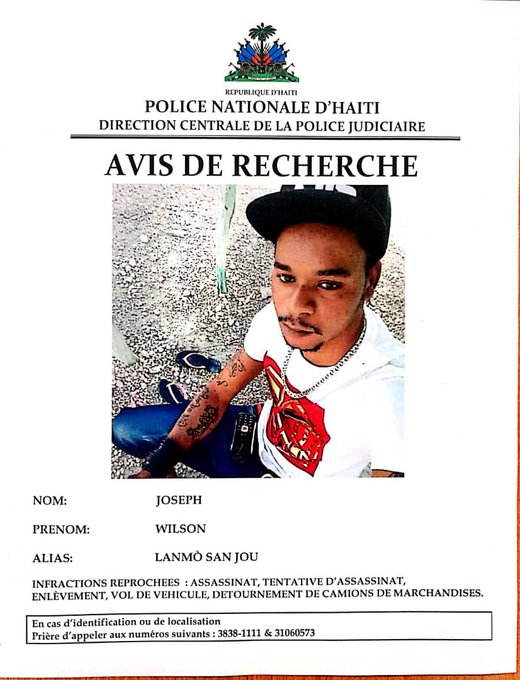 The United States Department of State through its Secretary, Antony J. Blinken has announced reward offers for information leading to the arrest and convictions of three Haitian Gang Leaders. In a press release made available to Techscoops, Blinken said on each of the wanted criminals, the department of state is ready to part with $1 million.

As part of our efforts to continue imposing consequences and holding accountable those fomenting violence in Haiti, I am announcing reward offers of up to $1 million each for information leading to the arrests and/or convictions of three Haitian nationals — Lanmò Sanjou, a/k/a Joseph Wilson, Jermaine Stephenson, a/k/a Gaspiyay, and Vitel‘Homme Innocent — for conspiring to participate in or attempting to participate in transnational organized crime. We are doing so in conjunction with the announcement of charges against the three individuals by the U.S. Department of Justice, Blinken said.

On October 16, 2021, the 400 Mawozo gang engaged in a conspiracy to kidnap 16 U.S. Christian missionaries and one Canadian missionary and hold them for ransom. The missionaries were abducted after visiting an orphanage in the town of Ganthier, east of Port-au-Prince. The kidnapping victims of the missionary group included twelve adults and five children.

The United States supports the efforts of our Haitian law enforcement partners seeking to enforce rule of law in Haiti and combat transnational organized crime which continues to be a driving factor in worsening the humanitarian and security situation. These actions are part of the United States’ commitment to support the people of Haiti as they bear the brunt of the crisis.

These rewards are offered under the U.S. Department of State’s Transnational Organized Crime Rewards Program, which, together with the Narcotics Rewards Program, has helped bring more than 75 transnational criminals and major narcotics traffickers to justice. The U.S. Department of State has paid more than $155 million in rewards under these programs for information leading to apprehensions and convictions.